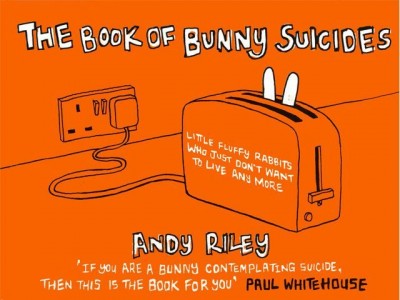 The Book Of Bunny Suicides

Andy’s first book, this is a load of drawings of rabbits killing themselves in vastly different ways. It was first published in 2003 in Britain, but it’s now been published in translation in over a dozen countries. As most of the cartoons are wordless, it’s a pretty easy ride for translators everywhere.
It was the subject of a highly unsuccessful book-burning campaign in Oregon in 2007.

“If you are a bunny contemplating suicide, then this is the book for you” – Paul Whitehouse

“At last, a British Gary Larson. But without the other animals.” – David Baddiel

Here’s some pages from it.