What I’ve learned in 26 years as an Urban Cowboy 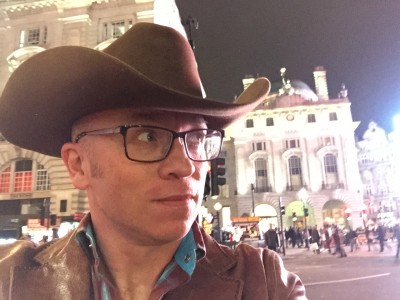 In September 1989 I was hitching through the Rocky Mountains. I was 19. I was in Durango, Colorado: a town I travelled to for the well-thought-out reason that there was a Ramones instrumental I liked called Durango 95. I had a few spare dollars to burn, so I bought a cowboy hat. A proper one, made out of beaver and rabbit fur minced up and turned into felt, not one of your novelty hen night items.

It turned out to be a big style decision for me. When I got back to Britain a month later I kept on wearing the hat. As a teenager I was fascinated by Jon Voight’s character in Midnight Cowboy, Joe Buck. Joe travels from Texas to New York and insists on walking Manhattan dressed for a rodeo. You’re supposed to see his character as hopelessly naive, even delusional. Not a state to aspire to. I got the wrong end of the stick entirely. I loved the romance of moving through one world, but wearing clothes from another.

As the years went by, western wear sprouted all over me; the shirts, the boots, hats and more hats, belt buckles big as a toaster, a fringed jacket which is a bit over the top even for me. I feel comfortable in this stuff, like it’s the way I was always meant to dress. I identify as cowboy, I’m trans-cowboy.

I don’t dress like this all the time. Just quite a lot. For a quarter of a century. Here’s what I’ve discovered.

Twats in the street only ever shout one thing at you. Which is: ‘Yee-haa.’ That’s all they’ve got, ninety five percent of the time. You might walk past thousands of people and nobody says it, but then there’s one twat who does. And being a twat, he thinks he’s the first who ever did, and gets the hump if you don’t react to it. In his mind he’s sniped you up with his Jimmy Carr quip rifle. The other things people say are: ‘Where’s your horse’ (2.4% of the time) and the first bar of the theme from The Good, The Bad and The Ugly (2.4% of the time). Any other comments are so rare that decades later I can remember where and when they happened. A favourite was a guy ten years ago who shouted ‘Hey! Toy Story!’

There’s one section of the population who can most be relied on to shout Yee-haa. Rugby lads, city boys in suits. Who else was it going to be?

If you’re going to pick an affectation, make it a practical one. Cowboy hats cool you in the sun, and you don’t notice the rain when you’ve got an umbrella on your head made from beaver pubes.

Blokes who want to wear your hat in a nightclub are nearly always arseholes. He’ll get shitty with you for refusing to be a clothes library. It’s a proper hat pal, it’s not from a fucking joke shop. The same arsehole has a worse arsehole friend who thinks it’ll be funny to steal it off your head when your back’s turned, so move away from that group fast.

Cowboy hats always seems to look better on a woman than on me or any other man.

You live in fear of hipsters discovering your thing. There was a moment in 1999/2000 when western wear was a bubbling-under fashion trend. You saw the shirts around a lot more. I was dreading Stetsons mushrooming on skulls all over Hoxton. Madonna, always alert to this sort of thing, did a western-themed video for Don’t Tell Me in 2000. Then the trend blew over, before it reached critical mass. Since then I’ve been safe, what with the hipsters laboriously reworking every British pre-1940 look they could find. We’ve seen London bars full of Edwardian fops and Cyber-Ewan-McColls, but so far no cowpokes.

You can take the outfit anywhere. Even the hardest pubs. You’ll be okay. It’s a look which disarms people. Except the city boy twats but enough on them.

You have to really learn to wear the hat. Hayley Campbell noticed that when it’s on, I strut; if I take it off, I’m all normal and shambly. And dancing with the hat and boots is just the best. You can really perform. There’s a whole repertoire of swivels, turns and flamenco stamps that wouldn’t make any sense in trainers and a beanie.

When you meet another man in a cowboy hat you repel each other like the north ends of two magnets. In Wyoming or Arizona, dressing cowboy is bang normal. But wearing the look in London, marking yourself out is the whole point. The last thing you want to see is a guy who had the same idea. He never wants to catch your eye either. But he’s probably going for that gothy-cowboy comic geek look anyway. Luckily it doesn’t happen more than once a year.

Britain’s got a whole lot more tolerant for looks outside the norm. In the early nineties, people gawped sometimes. Now they don’t so much.

Don’t you wear all this stuff. It’s mine, do you hear? All mine!