We won at the Emmys 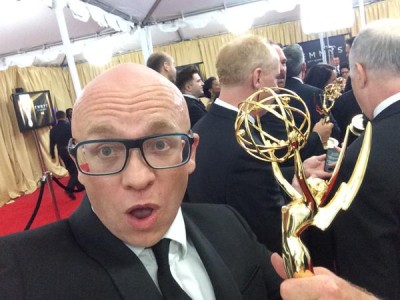 In TV, you can’t get bigger than the Emmys. Not many British people get to win one, but that night a whole load of us did. Although Veep is all about American politics, all the writers have been British (though that’s changing for season five). It was like our club winning the Champions League. It was all such a dizzying swirl I couldn’t give an account of it in order, but a few things stood out:

– When they announced that Mel Brooks was giving out the award, I felt a sudden surge of near-certainty that we would get it. Mel Brooks! It would just be too perfect to not happen.

– Professional reporters can ask pretty stupid questions. One asked Armando Iannucci, the show-running producer, how he felt about depriving Modern Family of what would have been a historic six Emmys in a row. What was he supposed to say? “I feel so guilty that five years of hard work on my show has resulted in this Emmy” or something? He answered this one pretty well, saying he preferred to think of it as the first time Veep had won. But really, come on.

– The trophies themselves have totemic power on the evening. At the HBO after party, there were about 13 statuettes on our table. Together they glowed like a camp fire. We gathered round, grinning and basking in the warmth.

– People love to grab your Emmy and pose with it. A few photographs is okay. But a group of four dicked around with one of Tony Roche’s Emmys for a full quarter of an hour. The urge to swoop in and gather the trophy back becomes strong. Hard-won is an Emmy: you want to keep it close.

– You really want your hand luggage to be searched at the airport, just to give you another excuse to pull the thing out and look at it.

I will calm down at some point and stop thinking about it. But not quite yet. Doesn’t happen every day.