M.G.I.C.B.T.M.T. or how I got someone to make me a ten foot monolith 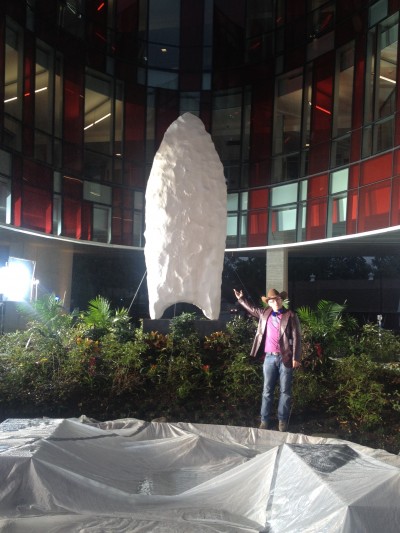 One of the best things about being a scriptwriter is walking on to the set. For so long, you’re visualising a place in three dimensions as you spend months shuffling around characters, plots, ideas. You get so used to it being an imaginary place, existing only in your head, that it’s a tremendous psychic jolt when it actually gets built and you step into it for the first time. Your mind goes: My God! I Can’t Believe They Made That!

I’ve done this job for quite a few years, so arranging a few sofas and chairs in a living room set doesn’t quite shock me any more. Now that I’m writing for Veep I’m seeing the American budgets make big American things and the MGICBTMT effect is stunning again. Last year on season three on show, Kevin Cecil and me co-wrote an episode called ‘Clovis,’ named after the imaginary silicon valley company that Selina Meyer and her team visit. I worked out the entire rationale of what it would be called that. It’s named after the Clovis point, kind of flint spear tip found over much of North America, dating from about 15,000 years ago. Clovis the company would themselves say: “just as those early settlers of America designed a universal tool for their civilisation, we are designing the new universal tools for ours.” I knew this would never make it into the show because it didn’t have jokes it. But I was enjoying being intellectually rigourous about the whole thing. I passed these thoughts on to the director to pass onto the art department.

When I got on the set, I was imagining there might be a couple of posters stuck to the wall featuring a Clovis point on them somewhere. What I was NOT expecting was a huge clovis-shaped megalith for the characters to walk past. I was beside myself with glee. You’ve never seen someone get so excited by a big assembly of wood, wire, plastic and paint.

The monolith barely features in episode itself.  And an even madder thing didn’t feature in the episode at all. It was set in San Francisco, but filmed in Maryland, so to make the whole thing look more Californian, four palm trees were uprooted from a much warmer east coast (somebody told me South Carolina), loaded on a truck, driven up the coast, and inserted into the ground for just one day. I’ve never seen full size trees moving for television before. The trees didn’t make the edit.

I love big sets. It’s such a treat. And in more reflective moments I consider the carbon footprint. But it’s such a fun way to destroy the world.