Gnomeo and Juliet, no.1 in UK! 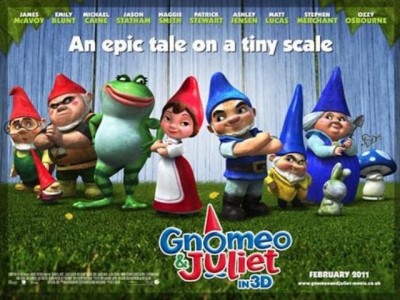 the animated film that me and Kevin have been writing for, on and off, for nine years is finally in the cinema. Nice! For years,we have mentioned this film about warring garden gnomes to our friends, who must have thought well, what the hell are they talking about? It’s kind of a weird experience to see it advertised on the telly and on the sides of buses. Mark Kermode, the film critic, hates films being advertised on buses. but I’ve never cared what he thinks. And his rockabilly quiff has receded so far back on his head that it’ll the halfway down his back by next year.

Gnomeo and Juliet has had a cracking first three days at the box office. It was the highest grossing film in the UK over the weekend, and in America it’s come a close third behind Adam Sandler and Justin Bieber, grossing about $25 million so far. A good, good result. The producers have been sweating bullets but I think they can relax a little bit now and enjoy the ride.

Now, how are we going to do a sequel?