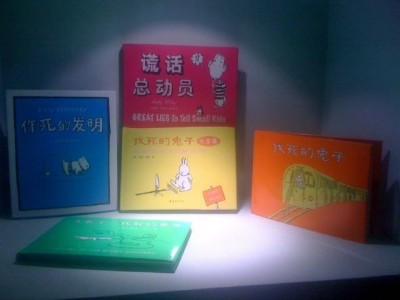 Remember – Dawn Of The Bunny Suicides is in the shops! At least if you’re in the UK, Australia, and a few other places. It’s 160 pages of entirely new bunny deaths. It’ll be out in other languagees and countries during 2011.

Doing that book, plus another two (of which news soon) plus a load of typing in my other job of scriptwriting has strained my right hand though. That’s bad for a cartoonist/writer. So since October i’ve been resting it completely – hence no new doodles on this site, and no typing. It’s very frustrating. Recovery from this kind of RSI thing is never fast. But, slowly, it’s getting better and I hope to be baack drawwing early next year.

In the meantine… here are my new chinese language versions of Great Lies, DIY Dentistry, the first 2 bunny books and the collected bumper book. A proud little display in my living room.

Also; for those with iphones, do check out the Bunnycides app.